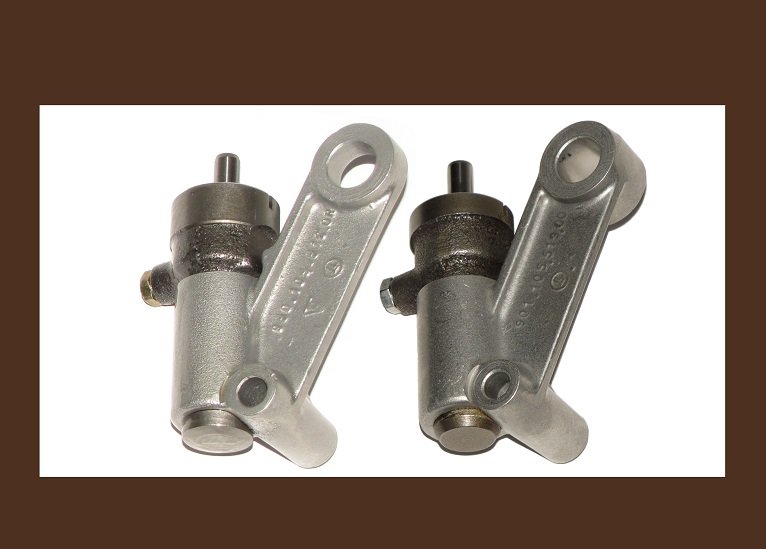 The journey of the 911’s chain tensioner spans 20 years of development. With the 911 engine being an overhead chain driven camshaft design the need for a reliable tensioner was paramount. However, it did not quite work out the way Porsche had hoped.

The first design of the timing chain tensioner was a simple open type hydraulic unit. The tensioner was made from a cast aluminum body that incorporated a piston and valve assembly. The body also had an oil cup cast into it at the top. The idea was that the oil cup on the top of the tensioner would be constantly refilled with oil from the timing chain passing over it. As the chain flexed up and down the spring loaded piston would be filled with oil. This would then apply a constant hydraulic pressure to the chain.

At least that was the idea, however in reality it did not work very well. The valving used in the early chain tensioners were prone to failures resulting in it collapsing. The oil cup could also loose oil under vehicle acceleration, braking and cornering. This meant that air could enter the chain tensioners hydraulic system resulting in a collapse.

By 1968 Porsche had come up with another design for the chain tensioner. Instead of relying on oil from the timing chain to feed the tensioner a reservoir was added. Then tensioner still used a hydraulic piston and spring to apply pressure to the chain. However, with a self-contained reservoir the tensioner could not lose its prime.

The reservoir consisted of a piston and spring that would apply pressure to the oil reservoir. When the tensioner was built the air was bleed out of the oil chamber using a bleed screw. With constant pressure applied to the system it ensured that no air could enter the hydraulic system.

Unfortunately, though solving one problem the valving was still an issue. In 1970, just two years after the introduction of the new tensioner the part was being revised again. The check valve located under the head of the pressure piston was prone to leakage. When the valve could not seal it would allow oil to by-pass the piston back into the reservoir. This then allowed the piston to collapse under the timing chain pressure.

The fix for this issue was to install a new check valve and seat assembly. The retaining cage was revised, and an O-ring added to the seat to aid with sealing the check valve assembly to the piston.

In the late 70’s the first of the 930 design tensioners were introduced. While still using the wide flange design of the 901 tensioner they used an updated piston. The piston had been lengthened, so in the event of a failure the tensioner would still provide some support. The body dimensions had been increased slightly to 78.2 mm overall height and a stop was added to the cast iron portion of the body. The stop was only used in manufacturing  and made no differences to the operation of the tensioner.

In 1979 the chain tensioner saw its last revision. Along with the chain tensioner the other internals of the engine had been changing. One of those changes was to the timing chain support arm. The original pivot arm had already changed from a non-bushed pivot arm to being bushed with a bronze bushing. The next evolution was to increase the width of the bearing surface. This meant that it would reduce the load placed on the pivot shaft, but also meant that the original wide flange tensioner would no longer fit.

There were other internal changes to the tensioner. The top pressure piston thickness was changed to increase the reservoir volume. Also, the type of internal O-rings were changed to try and prolong the service life of the unit.

Despite 20 years of development the chain tensioners were still failing. Over time the orings would become hard and would no longer seal. This led to the oil reservoir emptying out under spring pressure. Then the tensioner would get air into the hydraulic system resulting in a collapse.

In 1984 Porsche was finally able to come up with a solution, the oil-fed chain tensioner. The new style timing chain tensioner still operates on the same principle of a spring-loaded hydraulic piston. However, instead of using a self-contained oil reservoir, the tensioner is now pressure fed oil. The oil comes from a tee junction in the camshaft oil feed line. This allows the chain tensioners reservoir to be constantly full of pressured engine oil.

The way the system works is that the pressurized oil is feed into a chamber next to the hydraulic piston. Once the chamber is full excess oil is allowed to flow out the top via an air bleed. The amount of pressure in the chamber is regulated by the orifice size and the air bleed. The pressure does not need to high as it is not doing anything other than maintaining an air free oil tank for the tensioner.

The hydraulic tensioners were approved by Porsche to be installed in all engines dating back to 1968. However, you need to keep in mind on the 1969-75 engines the size of the oil pump. Because the hydraulic chain tensioner is basically a calibrated oil leak inside the engine it will place stress on the lubrication system.

On engines built prior to 1976, the oil pumps were relatively small compared to the pump used in the 1984 models. It might be wise to consider updating the entire lubrication system when using the hydraulic tensioners on an early motor. Keep up with other TSB’s on the oil lines when fitting the new kit as well.

Aftermarket attempts to solve the issue

Throughout the years there have been several fixes for the 911 chain tensioner problem. One of the first methods to hit the market was the “Hydra Stops”. This consisted of an aluminum shaft collar that was clamped to the protruding hydraulic piston. The idea was that if the tensioner failed the shaft collar would prevent the piston from collapsing into the tensioner.

Though in principle not a bad idea but in my experience, I have rarely seen them work. The issue is the hardened steel piston shaft is very smooth. So, when the shaft collar is attached it feels tight. however, the stress placed on them by the timing chain can easily overcome the friction of the collar. I have pulled out dozens of failed tensioners with collars on them. All of them just pushed the collar up the piston.

Basically, this method is about the worst thing you can do to an engine. When the engine is running the timing chain tension requirements are constantly changing. As the engine heats up it expands, changing the length requirements of the chain. As the valves open and close the chain can tend to want to “Whip” and the tensioner needs to be able to adjust for these changes.

Firstly, you would need to be able to adjust the chain tension so that it is not too tight or too loose. Now as soon as the engine heats up and expands now the chain is too tight. Also, as the chain stretches in normal operation, you have to go back in and try to re-adjust again. All that usually happens when using a solid tensioner is you are going to wear out the chain drives and the timing chain prematurely.

In the last 15 years, we have seen the restoration market decide not to use the hydraulic chain tensioners. Because more people are wanting that “Original” car even with its flaws. We have seen the demand for the old tensioners increase. The collector doesn’t want to see the oil pipe heading down the front timing cover, even if it is an improvement.

In the last 10 years I have rebuilt more 901 and 930 tensioners than the previous 20 years combined. In the 1990’s thru early 2000’s I would haven’t considered ever putting an old style tensioner back into a motor. Today though I’m seeing more and more built engines still using the old technology.

Rebuilding the timing chain tensioner is not a hard job to do. If you plan on using one of these style tensioners in your motor, you can still do a few things to give it the best chance you can to make it survive.

Firstly, go ahead and buy the factory rebuild build kit. The kit comes with all the updated valving and orings. When the tensioner is apart make sure everything is 100% clean before it goes back together. Be careful when installing the retaining circlips that you don’t damage the bores. Lastly when installing the tensioner use the factory tools. Incorrectly compressing or prying a tensioner to install it can cause it to fail.

If you not comfortable doing the job yourself there are a number of sources for rebuilt tensioners. The other option is the 930.105.053.04 tensioner. This is a new version of the last version used by Porsche in 1983, however sometimes availability can be an issue and it can be expensive.

Kurt Donohoe has had over thirty years’ experience in the automotive field. Starting in 1988 working for a BMW dealership, shortly before securing an apprenticeship with a Porsche Dealership. Kurt completed the Porsche apprentice training program and was awarded Porsche 2nd year apprentice of the year out of all the Porsche dealers in Australia in 1990. Kurt has founded two automotive repair shops specializing in German automobiles, specifically Porsche. He also founded a Porsche online parts warehouse and has designed and engineered several replacement parts for Porsche vehicles. Kurt is currently working on his latest venture for training mechanics and owners on how to repair vintage cars.
PrevPreviousOil By-Pass Modification. Do I need to do it?
NextRace Cars versus Street CarsNext

2 thoughts on “The 911 Timing Chain Tensioner, it’s history and future.”