Oil By-Pass Modification. Do I need to do it? 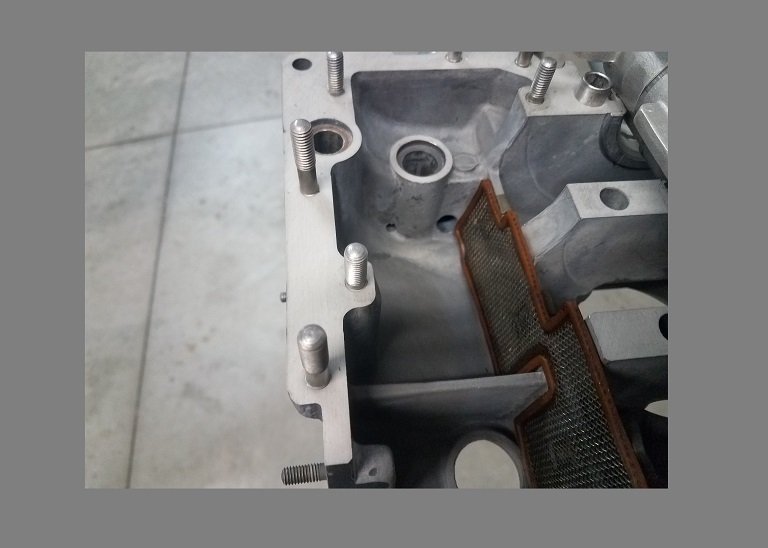 The oil bypass modification has been around since 1975. However, it seems that it is still misunderstood in how it needs to be applied. So, for this week’s article, I thought I would cover this common modification along with some of the other oil systems changes.

The maximum oil pressure in any engine is controlled by an oil pressure piston and spring assembly. When oil pressure overcomes the control spring, it pushes the valve down. When the valve moves down it exposes a by-pass bore. This allows oil to by-pass the main pressure gallery and instead is dumped into the crankcase to be pickup and recirculated again.

Usually, the valve is opening at higher engine RPM when the pump is moving the most amount of oil volume. When the pressure drops below the mechanical limit of the spring the valve will close. Thus, the cycle repeats.

Up until the 1976 models the excess oil from the oil system was dumped back into the crankcase. It then had to be picked up by the scavenge pump and returned to the oil tank. Porsche had been slowly increasing the capacity of the oil pumps to keep up with the increasing demands of the lubrication system. However, up until this point it had not been an issue with the current by-pass system.

In September of 1975 Porsche switched to the 4 rib style of oil pump for the 1976 2.7L engines. In this new oil pump, the size of the pressure pump meant that the scavenge pump could no longer keep up with it. What this meant was that when the oil pressure control piston opened up and began flowing excess oil into the crankcase, the scavenge pump could not return that amount of oil to the oil tank fast enough. This led to the crankcase being overfilled with engine oil.

The Oil By Pass Fix

To resolve this issue Porsche changed the way the by-pass system worked. Instead of dumping oil into the crankcase, they redirected the excess oil back into the oil pump intake circuit. This effectively meant that the oil was creating a loop back into the pump. This took the load off the scavenge pump to return excess oil to the oil tank.

Porsche also made some changes to the oil pressure control pistons as well. The original pistons that were used in the early (pre-1976 model) engines had 4 holes drilled in the side of them. These holes allowed oil to flow through the piston, making it somewhat easier for oil to by pass back into the crankcase. The new oil control pistons had the holes removed and instead just had a single groove machined in the top of the piston.

Oil pump sizes where continually being increased throughout the development of the engine. This was due to increased horsepower placing a larger cooling requirement on the oil and therefore the use of external fender mounted oil coolers. The same oil pump that feeds the engine now has to push oil all the way to the front of the car and back again. There were also more calibrated pressure drops being placed in the lubrication system.

These pressure drops were items like piston cooling jets that sprayed oil at the back of the pistons to help cool them. Adding the new updated pressure fed timing chain tensioners are also adding more load

Basically, the entire lubrication system is one big calibrated internal oil leak. An oil leak that the pump has to be able to keep up with.

So, the question arises, do we need to update an early engine to the later by pass system? That is going to depend on what you are doing to the engine. If you plan on sticking with the original oil pump that the engine was designed to run, then no you don’t need to change the by pass system. It is still a good idea to use the new oil pressure control piston, spring, plug, and guide assembly though. As these items improved the control function and reduced wear in the bypass bore.

If you are installing a later model pump or an improved flow rate pump then answer is yes, the by pass system will need to be updated. This is a fairly simple operation that most air cooled machine shops can carry out for not much money. The process is simple, the passage way between the oil intake and the bypass bore are connected by drilling a new passage way. The existing hole from the bypass bore into the crankcase is then plugged.

The next question you have to ask yourself is, do I need a larger oil pump? To answer this, you need to look at what you are doing with the engine. If everything is remaining in its stock configuration and other than basic TSB updates being performed, then I would say no. If you are adding piston cooling jets, hydraulic tensioners, adding a front oil cooler, or an additional cooler then yes. This is because all of these items are placing an additional load on the lubrication system.

Sizing the entire system is also an important factor. Yes, you can install a pump that is too big. It is important that the right sized parts are used when ever making modifications. Using an oil pump that flows a huge amount oil with a stock 2.0L engine with no front oil cooler, no hydraulic tensioners and no piston spray jets may lead to the oil by pass system never closing. This is because the pump is far bigger than the engine needs.

Other factors to consider

It does not hurt anything to perform the oil by pass modification. Even if you plan on sticking with an original oil pump. It will have no ill effects on the system. Sometimes the original oil pump is worn out and the only replacement pump available are later model higher flowing units. This is all fine, just make sure to match everything in the system, so that you do not create an issue.

Kurt Donohoe has had over thirty years’ experience in the automotive field. Starting in 1988 working for a BMW dealership, shortly before securing an apprenticeship with a Porsche Dealership. Kurt completed the Porsche apprentice training program and was awarded Porsche 2nd year apprentice of the year out of all the Porsche dealers in Australia in 1990. Kurt has founded two automotive repair shops specializing in German automobiles, specifically Porsche. He also founded a Porsche online parts warehouse and has designed and engineered several replacement parts for Porsche vehicles. Kurt is currently working on his latest venture for training mechanics and owners on how to repair vintage cars.
PrevPreviousThe Automotive Oscilloscope
NextThe 911 Timing Chain Tensioner, it’s history and future.Next

1 thought on “Oil By-Pass Modification. Do I need to do it?”