Understanding Ignition Timing and it’s effect on your engine. 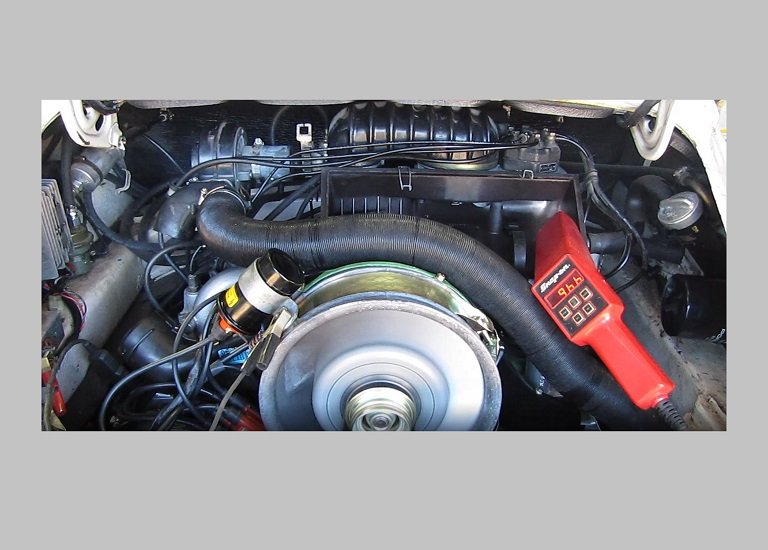 The purpose of ignition timing is to ignite the air/fuel mixture at the right time to push the piston down. Understanding ignition timing and it’s effect on your engine, is a good place to start.

Bang! The spark plug is fired, and the air-fuel mixture starts to burn. As it burns it expands, pushing the piston down creating the power stroke. The speed of the mixture burn is dependent upon, compression, chamber design, air fuel/ratio, and spark plug location and number of spark plugs. The ideal peak pressure point is around 15° to 20° after top dead Center, (ATDC). This is not dependent on engine load, but rather the engines design geometry where the crank is best positioned for leverage.

When two or more spark plugs are used the combustion speeds will be increased. Therefore, the air/fuel mixture needs to be ignited later to produce peak pressures at the right time.

High performance engines produced by Porsche like the 911S models use higher compression pistons. Therefore, the advance curves used in those engines usually peak at 30° total advance. Twin Plug racing engines will peak at 26° to 28° total advance, due to compression and two spark plugs being used.

The mechanical control is a series of weights and springs that respond to centrifugal force. As the engine speed increases the weights overcome the spring force and move the ignition timing forward. Vacuum controls use a manifold vacuum to pull or push a diaphragm that moves the ignition timing. The vacuum is ported; timed to a particular throttle opening. Or manifold vacuum; load sensing.

An ignition distributor that uses the combination of mechanical and vacuum controls will be the most efficient. Some people feel that vacuum controls are smog controls. They think they are making an upgrade when removed or disabled. Although emissions are a factor in timing controls, an engine that is correctly set up with a vacuum will produce good power and drivability.

Changing a engines ignition timing curve can be dangerous. There is often a misconception that advancing ignition timing increases power. Over advancing the ignition timing can result in severe damage. If the pressure build happens before TDC, (Top Dead Center), then the engine will try to turn backwards, costing power. If the chamber pressure peaks too close to TDC,  where the mechanical leverage on the crankshaft is not optimum, it will cost power. This can also result in much higher-pressure peaks and temperatures. All of these effects can lead to pre-detonation knocks, piston and ring damage and increased bearing wear.

Adding aftermarket turbos or super chargers without retarding ignition timing will result in the same type of damage. Similarly increasing the boost pressure above a factory setting without changing timing curves will result in increased pressures and temperatures.

Though changing the engines internal design will change ignition timing demands. Changing the fuel system type or exhaust system will not. What will have a large effect is the mixture strength. If a fuel injection system is replaced with carburetors, tuners will tend to advance the ignition timing. Often thinking that this is the way to make more power. However, it is usually because the mixture strength is too rich or too lean and is slowing down the burn rate. It is far more beneficial to have a correct fuel air mixture than try to compensate for it with ignition timing.

It is another misconception that adding more fuel and more timing will make more power. This is not the case as the richer fuel mixture will slow the flame front. This means that more advance will be needed to get the peak pressure at the right time.  All that will happen is the engine will consume more fuel without making any more power. In fact, it is more likely to produce lower horsepower and torque.

Ignition timing curves are usually not just a liner line. As engine speed increases so does the timing requirements. Most of the time the ignition will advance the most at lower speeds. Usually by the time the engine is at 3000 rpm it will have 60% of its total advance already in. As the engine speed increases the amount of advance will slowly raise until it reaches its total advance. When using vacuum controls that use both ported and manifold signals timing can be adjusted for engine load and throttle position. This can result in timing being retarded at higher engine speeds to meet a predetermined map. To calculate the total advance in degrees you need to add the mechanical advance + vacuum advance + vacuum retard.

The ignition timing is an important part of a complete engine package. I would never recommend swapping distributors in the hopes of getting more power from an engine. If a particular distributor is no longer available be very careful when selecting a replacement that it closely matches the original timing curve.

Kurt Donohoe has had over thirty years’ experience in the automotive field. Starting in 1988 working for a BMW dealership, shortly before securing an apprenticeship with a Porsche Dealership. Kurt completed the Porsche apprentice training program and was awarded Porsche 2nd year apprentice of the year out of all the Porsche dealers in Australia in 1990. Kurt has founded two automotive repair shops specializing in German automobiles, specifically Porsche. He also founded a Porsche online parts warehouse and has designed and engineered several replacement parts for Porsche vehicles. Kurt is currently working on his latest venture for training mechanics and owners on how to repair vintage cars.
PrevPreviousPorsche Crankcase sealant
NextAutomotive Parts Replacement. Why did the part fail?Next

3 thoughts on “Understanding Ignition Timing and it’s effect on your engine.”