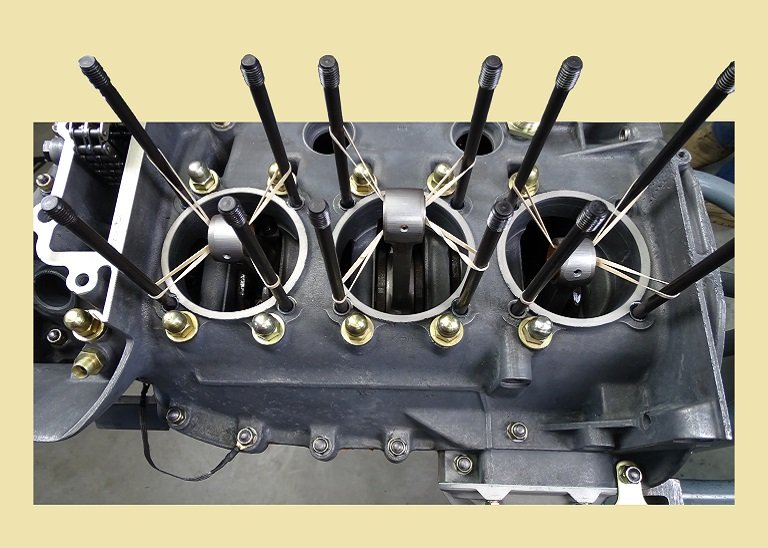 The cylinder head stud used in the 911 models is another one of those parts that has seen many different changes over the years. It was often the cause of failure for many combustion chamber leaks and oil leaks. Whether the stud itself failed or the threads in the case that failed, one thing that was for sure the repair is expense and time consuming.

The history of the Head Stud

Porsche had been using the same type and design of cylinder head stud for 20 years before the 911 motor came along in the 4 cylinder motors. In the 356 and 912 motors broken head studs or pulled threads are a rarity and failures are just not seen often. With the 6 cylinder design Porsche used the same type and design of cylinder head studs and nuts. At first the 6 cylinder engines were an aluminum case engine, just like the 356 models and had a similar bore size cylinder. The also used cast iron cylinders or Biral type cylinders, just like the 356 models.

In the early motors, (1965-67), head studs were not really such a problem. However, in 1968 with the introduction of the magnesium crankcases things were about to change. At first the main issues were just head stud loosening requiring that the head studs be re-torqued during regular service intervals. This was a change from the 4 cylinder motors were re-torqueing was not needed and somewhat impossible to do without some disassembly.

The real issues began to show when the engines reached the 2.7L displacement. With the introduction of the 2.7L engine came a new cylinder design. Instead of the cylinders being a cast iron or a biral design, (cast iron sleeve with aluminum fins), they were now all aluminum. The aluminum cylinders were coated with a Nikasil plating. The coating makes the aluminum extremely strong and resistant to wear. However, without the cast iron liner the expansion rate of the cylinder has greatly increased.

Because aluminum alloys expand at twice that of steel the amount of pressure placed on the head studs as the engine heats up is now greatly increased. The next issue we began to see was increased engine and exhaust temperatures due to emission controls and leaner fuel mixtures. This increased heat not only affected the thermal expansion but also heated the studs up, particularly on the exhaust side. This increased their chances of rust as the oils are cooked out of the metal and moisture from the road conditions could accelerate corrosion.

Porsche had encountered the problems of head stud failures in their racing program and had been experimenting with a new type of alloy head stud. The alloy had been developed by a French company and had been engineered so its thermal expansion rate closely matched that of the mostly aluminum motor. The new material was trademarked as Dilavar.

The head studs were first used in production engines in 1977 models. The TSB bulletin 7704 released in July 1977 stated that whenever the cylinder heads were removed the mild steel studs were to be replaced with Dilavar studs on the exhaust side. The 911 Turbo models were fitted with Dilavar studs on both the intake and exhaust sides of the engine.

This first version of the Dilavar head studs had a very shiny finish to them. Most likely due to the high nickel content of the stud. However, as time progressed and failures due to corrosion persisted the studs also changed. In the early 1980’s the studs took on a yellowish finish. This was the first attempt at controlling the corrosion of the stud. By the late 1980’s the studs were being delivered by Porsche with a black powder coat finish on the shaft of the stud.

The last change to come in Dilavar stud was with the introduction of the 993 models in 1994. The studs changed dramatically in look. The outside of the stud is now almost all coated in threads. It still has a black powder coat finish applied to the outside of the stud. It now also comes with Blue or Red loctite applied the crankcase end of the stud. As far as the composition of the alloy we just don’t know if any changes were made to it over the years, as Porsche has not released that information.

There are 4 main types of head stud failures.

Up until 1978 most of the head stud failures seen were at the crankcase level. The original mounting of the studs into the crankcase was by a thread cut directly into the magnesium crankcase. The threads were the weak point in the equation and the studs would pull out of the case.

In 1978 Porsche changed the design of the crankcase to a pressure cast aluminum case. With the change the threads cut into the aluminum case were now stronger than those in the magnesium crankcases. With this change we now started to see more actual stud breakages rather than the stud pulling out of the case.

Stud breakages can occur anywhere along the length of the stud. I have seen them break in the middle, right at the case, and up just below the head nut. In the late 1980’s when still working for Porsche it was not uncommon when servicing 911SC to pull the valve covers and find two or three broken studs just sitting in their respective holes.

One of the most overlooked items when servicing a 911 is maintaining the correct cylinder head torque. Every 15,000 miles when a valve adjustment is performed the technician is supposed to check all cylinder head torques. This services two purposes, firstly it maintains the correct torque on structurally sound engines and secondly it will show up a failed head stud before it can cause more damage.

When checking the head nut torque the torque wrench needs to be set to 35 NM. It does not matter what order the nuts are torqued in, just that all nuts are correctly tightened. If one or more head studs are found to be broken this may or may not be cause for alarm. If the studs are broken or pulled on different cylinders and three of the four studs on any given cylinder are intact, then the repair can be scheduled around the owners needs and or budget. The engine can still be operated without further damage being done.

If two or more studs are broken on one cylinder, then this will require attention much sooner. It is also not recommended to continue operating the engine. Replacing the cylinder head studs is not a simple job, taking around 30 to 40 hours for an experienced Porsche shop to perform. So, it is important to evaluate your options when looking at this type of repair.

What to use and when

When repairing damaged head studs or rebuilding a motor in general there are several things to keep in mind.

A couple of things to keep in mind when working on the 911 and 930 models.

Lastly the new replacement cylinders that are being supplied by Mahle for the early 2.0L, 2.2L, and 2.4L engines are now the Nikasil type. This means that the expansion rate of the cylinder has now changed to that of the 2.7L engine. In my opinion if you are using any of these new cylinder designs on these early motors it is a good idea to apply the same standards of head studs to those motors. This can also be extended to the 912 engines as those cylinders are also now Nikasil.

There are several head studs on the market at the moment. For mild steel I like the Canyon brand of head stud. It comes with a powder coated finish on the stud to help protect from corrosion and I have no issues with them. For the dilavar stud the only ones that I use are the factory stud. I stick with the factory product because of all the development that this been put into this part. Once again using the factory part I have never had a problem.

ARP also makes a head stud kit for the 911/930 models. Usually the ARP product is generally good. However, they do not release the actual specification of the alloy that they use. Also, the stud is not coated to protect it from corrosion. My last thing that I don’t like is the type of nut supplied with the stud. It makes it a little harder when servicing the engine to get a 12 point socket into the cavity to re-torque at the service interval.

I always tend to lean towards factory parts when repairing. In all the engines I have done when setting up correctly and following the repair procedures I rarely have any issues.

Kurt Donohoe has had over thirty years’ experience in the automotive field. Starting in 1988 working for a BMW dealership, shortly before securing an apprenticeship with a Porsche Dealership. Kurt completed the Porsche apprentice training program and was awarded Porsche 2nd year apprentice of the year out of all the Porsche dealers in Australia in 1990. Kurt has founded two automotive repair shops specializing in German automobiles, specifically Porsche. He also founded a Porsche online parts warehouse and has designed and engineered several replacement parts for Porsche vehicles. Kurt is currently working on his latest venture for training mechanics and owners on how to repair vintage cars.
PrevPreviousThe Difference between Ignition Systems
NextHow to Buy Car Parts On-Line. Things have changed!Next