What Ignition Coil is right for my Porsche? 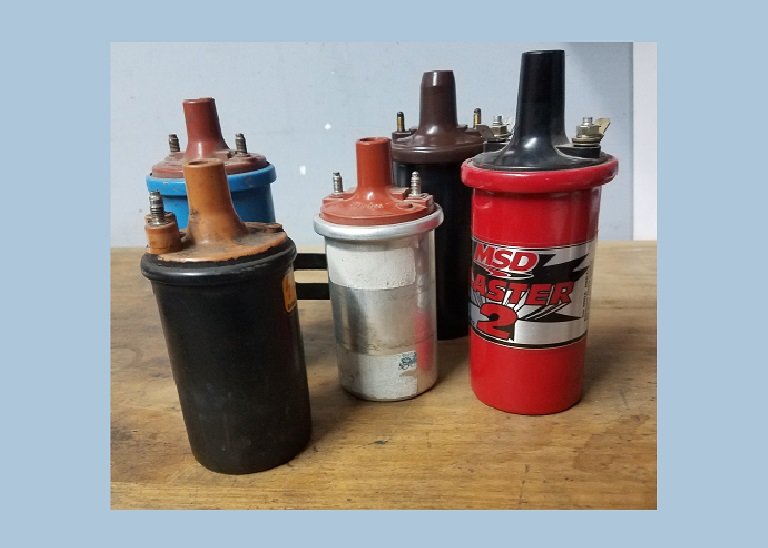 Which Ignition coil should I use? This is one of the biggest questions that we have ever had to answer from owners and mechanics alike. Ignition coils are one of the most misunderstood items in the engine compartment. The ignition coil is one of the key components in any ignition system. Though they may look similar there are large differences in how they work, and which is the right one for your car.

Porsche uses two types of ignition coils. In the classic Porsche models, cars built from 1948-69 use an inductive coil. Cars built from 1969-83 (911 models) and 1975-94, (930 Models) use a transformer type of coil. Though the coils appear similar on the outside the way they function is completely different from each other.

In an inductive coil, spark energy is built up and stored, then discharged into the spark plug. These types of coils were used in the Kettering style of ignition. This can also be called a points and condenser system. This is a common type of ignition. It has been used by all vehicle manufacturers. The way that this coil functions is that a current is passed through the primary side of the coil.

As the current flows it builds a magnetic field. While the magnetic field flows the coil will build up energy. When the ignition points break open and the current flow stops the field collapses through the secondary side of the coil windings. As the energy passes through the secondary side of the coil it is multiplied to a much higher voltage. This is dependent on the coil’s windings and the amount of charge time the coil has had.

This system is very simple and cheap to produce. However, it is limited in the amount of energy that it can produce. The biggest issue is the amount of available charge time given to the primary circuit. The longer the current can flow through the primary side of the coil the larger the charge the coil can build.

Where this really becomes a problem is in higher revving engines. In a high revving engine, the amount of charge time is limited due to the engine speed. At higher speeds, the coil may only reach 30% of its capacity resulting in much lower spark energy to the spark plug. When the plug receives lower energy, it may not burn hot enough to ignite the fuel mixture resulting in a misfire.

The coil in this system is really a step-up transformer with a very low inductance in the coil. The energy is passed through the transformer very quickly where the voltage is stepped up from 450 volts to 45,000 volts. The CDI system can recharge very quickly and is able to deliver a consistent spark throughout the entire RPM range.

Can I use A CDI coil on a non-CDI ignition system?

The answer to this is no. This is because the CDI coil has a very low inductance value. So, if a current was applied to the coils primary windings, it would still result in in a magnetic field. However, because of the very low inductance it is unable to generate a charge. Usually the only thing that will happen is that the primary windings will be overheated and will fail. This is also due to the primary wiring being much smaller than an inductive coil.

Can I use an inductive coil with a CDI ignition system?

The answer to this is yes and no. Though the inductive type coil will not damage the CDI ignition system it will severely limit its operation. The energy from a CDI system is delivered in one very quick pulse to the coil. This is unlike the Kettering system that lets the coil build up slowly to create a charge. In fact, the inductive coil still needs this time to build up its magnetic flux. So, what actually happens is that the coil will take approximately 10 times longer to transition the energy from the primary side to the secondary side and discharge.

The next effect of this is that the spark plug tends not to get it energy in one long pulse. Instead the plug will fire multiple times as enough energy reaches the plug for it to bridge the gap. The pictures below show the differences in time and burn patterns.

How to identify a coil

In the Porsche applications, it is usually pretty easy to spot the true CDI coils over an inductive coil. Because the CDI coils are built using a smaller case and will be physically shorter than most inductive coils. If you are not sure the easiest way to identify an inductive coil over a CDI coil is by its internal resistance.

A typical CDI coil will have a low primary resistance around 0.5 to 0.8 Ohms and a secondary resistance between 150 to 750 Ohms. In comparison, the inductive coils can vary greatly. The primary side can measure between 0.8 to 4.0 ohms depending on the design of the coil. The secondary side, however, is where you will see the greatest difference. Generally, the secondary sides are going to between 5,000 to 10,000 ohms. This measurement is the best way to judge the type of coil that’s installed.

How to test a coil

Testing a coil is a little harder than it sounds. The only way to really test the coil is to run it on a testbed and watch the output. Most all the coil failures that I have ever seen are an internal energy leakage to ground. This means that the spark energy will flow to ground instead of out to the spark plug. When this type of failure occurs, it will not show up when measuring the primary or secondary resistance. It is very rare for a coil to fail and to have that failure show up by measuring the resistance with an ohmmeter.

Kurt Donohoe has had over thirty years’ experience in the automotive field. Starting in 1988 working for a BMW dealership, shortly before securing an apprenticeship with a Porsche Dealership. Kurt completed the Porsche apprentice training program and was awarded Porsche 2nd year apprentice of the year out of all the Porsche dealers in Australia in 1990. Kurt has founded two automotive repair shops specializing in German automobiles, specifically Porsche. He also founded a Porsche online parts warehouse and has designed and engineered several replacement parts for Porsche vehicles. Kurt is currently working on his latest venture for training mechanics and owners on how to repair vintage cars.
PrevPreviousMy Porsche won’t start – what do I do now?
NextPorsche Crankcase sealantNext

6 thoughts on “What Ignition Coil is right for my Porsche?”