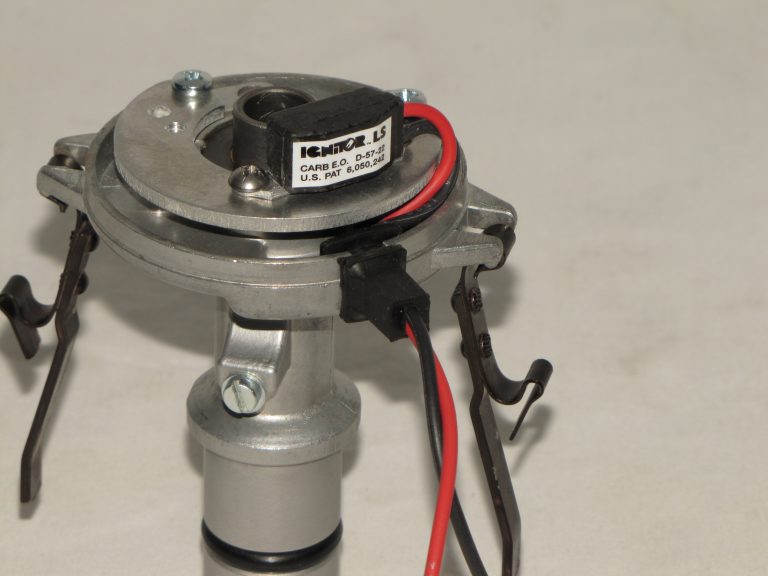 Are They Really Worth it?

Electronic ignition point replacements have been around for a long time. They have always been marketed as better than stock, but is this true? In this article, I will look at the advantages and disadvantages of using these systems. As well as my opinion and what I use in my own cars.

The 356 and 912 models use a conventional ignition system where the points are directly controlling spark energy. When points are used to control the amount of spark energy they are put under a large electrical load. This load is due to the ignition coil charging effect. This will cause the points to wear quickly requiring frequent service.

Electronic ignition as the name says are simply an electronic version of the mechanical ignition points. There are two main types of point replacements available. They are offered in optical designs or a Hall effect type. Though they work differently both systems will do the same job.

The hall effect system uses magnets that are installed onto the ignition distributor shaft. As the shaft rotates past the pickup transistor they cause the system to switch from ground to open. Thus, causing the ignition system to fire.

Electronic point systems will reduce the amount of service that the ignition system requires. Though the system will still need other routine maintenance. Using electronic point systems will replace both the points and condenser in the distributor. This means fewer parts to routinely replace. Electronic points will be more accurate in the firing point and are less affected by engine speed. This is because the electronic points do not have any wearing components or springs. On a mechanical set of points, the rubbing block and point contacts will wear. This wear changes the firing point, which will affect ignition timing and system performance. mechanical points also rely on a spring to close the contact. This spring often cannot keep up with higher revving engines, resulting in point bounce.

Some electronic point systems will claim that they have easier starting or higher performance. This can be somewhat true when using a standard, (non-CDI), ignition system. Systems like the Pertronix Ignitor II  will vary the dwell times to change coil saturation time. Increased coil saturation equals higher spark energy.

Shop For Electronic Points on Amazon

Electronic points will require extra wiring to install. Usually, this means running an extra ignition power wire to the coil or other power source. For concourse cars, this can be an issue having extra nonstock wires.

The hall effect system can be affected by temperature. Both the magnets and the electronics used in the trigger system will change with temperature. When using this type of system in an air-cooled application can result in issues. It is normal for an air-cooled engine to operate at 250°F or higher. This seems to have an ill effect on the signal quality of the Hall effect sensors.

My opinion on electronic points is that they are not worth the expense, and at least, as it regards to Porsche applications and here is why.

First, the initial outlay for the system is high compared to the cost of buying replacement points. In some cases, I could buy ten sets of standard points to one electronic set.

Secondly, there is no performance gain. Because all Porsche models use solid core ignition wires the use of dwell changing systems are out. Also, in the 911 models that use a CDI box, the CDI is responsible for ignition energy, not dwell time. In fact, if the Pertronix Ignitor II system is installed in a car with a CDI box it can result in other ignition system component damage.

The other benefit would be if the original ignition points are no longer available. Even if the aftermarket electronic point manufacturers don’t specifically make a replacement set for your car, typically one can be modified to fit.

My advice would be it’s a personal choice. In my own cars, I choose to use the original points. If you decide to install a set of electronic points choose carefully. My preference, when I must install an electronic point set is normally to use an optical set. however, in recent years those types of systems are getting harder to find. Make sure to carefully read the instructions before purchasing and when installing an electronic point system. Make sure that they are compatible with your application. Lastly, don’t expect any change in the vehicle’s performance. Especially if you are just changing to an electronic because you want to. Remember in most Porsche application points have no bearing on spark energy.

Kurt Donohoe has had over thirty years’ experience in the automotive field. Starting in 1988 working for a BMW dealership, shortly before securing an apprenticeship with a Porsche Dealership. Kurt completed the Porsche apprentice training program and was awarded Porsche 2nd year apprentice of the year out of all the Porsche dealers in Australia in 1990. Kurt has founded two automotive repair shops specializing in German automobiles, specifically Porsche. He also founded a Porsche online parts warehouse and has designed and engineered several replacement parts for Porsche vehicles. Kurt is currently working on his latest venture for training mechanics and owners on how to repair vintage cars.
PrevPreviousLeak Down Test Vs. Compression Test
NextMy Porsche won’t start – what do I do now?Next