Ignition wires, does it really matter what wire I use? 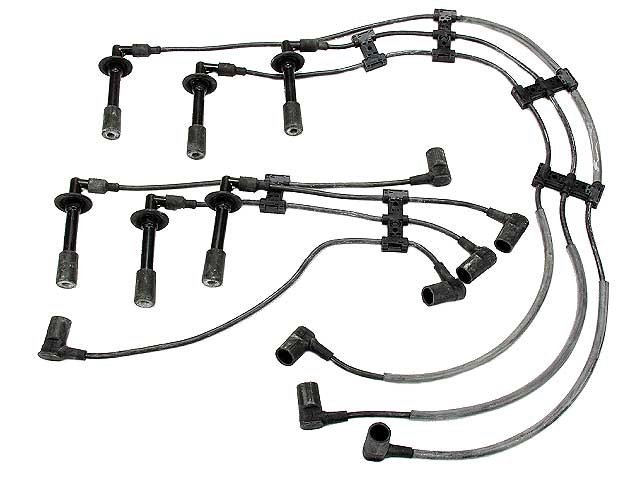 Ignition wires are used on almost every gasoline powered engine. They transmit the spark energy from the distributor cap to the spark plug. On most factory applications the wires are fairly bland, usually black in color and tend to blend into the engine compartment. Some wires, like the ones used on the 1978-83 911SC and Turbo models are covered in a metal braiding.

What if I want to change up the look of my engine compartment, changing the spark plug wires is a pretty easy job and usually the wires are very easy to see in the engine bay. What if I want to see a Red or Blue wires because it matches the color of the car or maybe I just like the color Red? What about all the aftermarket wire sets that I see they say they will improve my performance? Looks like a win-win, I get a cool color and more performance, how can I lose?

The spark plug wire sets used by the manufacturer are specifically designed to match the type of ignition system installed. In Porsche models the ignition system used was designed by Bosch and the wires are built to specifically work with that system. Like every system in your car there are a set of design parameters that specify what type of wire can and cannot be used.

The ignition wires that have been installed on your classic Porsche are a solid core design. This means that the internal conductor that connects the two ends of the wire is made from strands of copper. The secondary resistance that is required for correct system operation is built into the individual connectors, either at the spark plug or on the coil. This means that every spark plug will get the same amount of energy for the same amount of time, regardless the length of the wire.

The amount of resistance is also a key factor to the operation of the system. Too little resistance will result in a spark that moves to quickly and is erratic in its delivery. Too much resistance and spark energy will be reduced including spark plug burn time. Different resistance values from plug to plug will result in slight timing offsets, which means not every cylinder is operating in exactly the same way.

Most of the time the brightly colored aftermarket wire sets are made from resistance per inch silicone wire. These wires were originally designed and used on domestic ignition systems and instead of having a solid metal internal conductor they use a carbon core to transmit the energy from the cap to the plug.

This difference in resistance results in each spark plug getting a different amount of spark energy. It will also create a timing offset and changes in the amount of burn time each plug gets due to different resistance values.

One of the biggest issues with many of the aftermarket ignition wire sets is their dielectric strength, or in other words their resistance to electrical leakage. Most of the carbon core resistance per inch wires on the market today are designed for use in ignition systems that produce relatively low amounts of secondary voltage when compared to those used in Porsche ignition systems.

Generally, a good quality silicone ignition wire will be rated to be able to withstand or contain 35,000 volts. When used in a conventional ignition system this is fine as most secondary voltages are around 25,000 volts. However, when using this wire in a 1969-83 Porsche 911 or the 1975-94 Porsche 930 application the secondary voltages are in excess of 45,000 volts. This means that there will be a high chance that the wire will not be able to contain the energy and has the possibility of leaking or shorting to ground.

Another characteristic of carbon core wires is every time a spark signal is sent down the wire it erodes a little bit of the carbon away. This means that over time with normal use the internal conductor will wear away resulting in its eventual failure.

By using a factory designed spark plug wire set, we will get a part that is designed for the system. It will have the optimal resistance at each spark plug in the engine. Each spark plug will receive the same amount of energy at the same time. The ignition wire is designed to contain the energy and is not prone to leakage. Lastly the wire will last longer as it does not degrade with every signal transmitted down the wire and a resistor does fail it can be replaced without having to replace the entire set.

The aftermarket set is often not specifically designed for the system it is being used on. Most of the time will not have the correct factory specified resistance, which will result in different levels of spark energy at each plug. Also, it will most likely not be able to contain the amount of energy that is being delivered through the wire. Lastly will have a shorter life span and the entire set will require replacement much sooner than the factory original set.

Have you thought about your points and coils? As part of your ignition system, aftermarket choices can be made here too.

Kurt Donohoe has had over thirty years’ experience in the automotive field. Starting in 1988 working for a BMW dealership, shortly before securing an apprenticeship with a Porsche Dealership. Kurt completed the Porsche apprentice training program and was awarded Porsche 2nd year apprentice of the year out of all the Porsche dealers in Australia in 1990. Kurt has founded two automotive repair shops specializing in German automobiles, specifically Porsche. He also founded a Porsche online parts warehouse and has designed and engineered several replacement parts for Porsche vehicles. Kurt is currently working on his latest venture for training mechanics and owners on how to repair vintage cars.
PrevPreviousPainted Fan Housings and Other Pet Peeves
NextWhy We Opted for a Scissor LiftNext

7 thoughts on “Ignition wires, does it really matter what wire I use?”