In 1969 Porsche began using the Bosch CDI ignition system. At the time, they still used tachometers that required a higher than 12 volt input to trigger the tachometer. This is because when using a Points and condenser ignition system, the voltage on the signal/trigger line will spike when the points open to around 30 volts. VDO used this spike as its trigger point.

The early 1969 911T models were still fitted with the Kettering style ignition system for the first half of the production year. However, towards the end of the model year they began fitting all cars with CDI boxes. In order to continue to use the existing tachometers used in the early 1969 models Porsche added a ballast to the tach circuit, Part number 901.602.601.00, (No Longer Available New).

On the rear fuse panel, is a mounted ballast. The ballast has three terminals, A = Ground, B = Coil  “A” terminal, and C = Tachometer output. The ballast connected to the power side of the coil and received the 450-volt pulse from the CDI firing event. Then it would take that voltage and reduce it by passing the voltage through a resistor to bring the signal down to around 30 – 40 Volts. This signal would then be sent to the tachometer.

Signal wave form from the Ballast

The image below shows a 34 Volt signal going to the tachometer from the ballast. Note the signal event is extremely fast happening in about 250 uS, (1/4 of a millisecond).

The 911E and 911S models in compassion used a different design tachometer that is closer to what would be used from 1971 through 1994. It relied on seeing a clean 12 volt square wave coming directly from the trigger circuit. The Image below shows the signal going to the tachometer, note the voltage at the top of the square wave is equal to battery voltage, (13.4 volts). The tach signal will also mirror the points dwell in time.

Why the Difference in signals

Due to the load on the trigger points, there is a difference in signals. In the Kettering ignition system, the points are taking 3 – 4 amps of load across the switch. This is because they are the connection to the ground so that the coil can charge. As the points open the energy in the coil tries to continue to flow to ground and for a millisecond or so will jump the gap across the points as they open. This results in the 25 – 35 voltage spike in the front of the tach signal.

With a CDI box, the load across the points is reduced to 0.25 – 0.35 amps. This is since they are not responsible for charging the coil. When the points open there is no flow of energy to try to jump the gap to cause a voltage spike. This results in an exceptionally clean signal to the tachometer.

When converting an early vehicle to a CDI ignition the tachometer will need to be modified. This is a common thing today and one can do it quickly and relatively inexpensively. Tachometers used in the 911T models in 1969 and 1970 models will not work in the 1969-70 911E/S models, due to the difference in the signal. Using those one of those tachometers in a 911T will generally work but the needle will be erratic.

The two images below show a tachometer from a 1972 911T. This is when the tach was connected the car was a no start with erratic spark output from the CDI box. The first image shows the trigger circuit  with the tachometer disconnected and the engine running. Note the trigger signal is reaching battery voltage as it should.

As featured below, this is what happens when a signal line and tachometer connect.

Note that the signal has now reduced and is no longer reaching battery voltage. It is now at 10.8 volts instead of 13.4 volts. This is because the tachometers internal input capacitors are failing and act as a shunt to ground. This is modifying the input signal to the CDI box and can/will result in a no-start/no run condition as the CDI cannot recognize the trigger signal.

Most shops do not check for this type of failure. This is mainly because most people do not consider tachometers a part of the ignition system. To check for this type of issue is simple, connect your oscilloscope to the CDI trigger circuit and look for differences in amplitude of the signal compared to battery voltage.  A lower amplitude will mean a failing tachometer. Disconnecting the tach should also restore the trigger circuit amplitude. 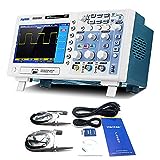 In cars fitted with the 3 pin CDI box the tachometer will rarely result in box failure. This is because the trigger circuit has a design in order to drive to the ground by the ignition points. The biggest symptoms would be no start, no spark, backing firing, and or erratic tach operation

6 pin CDI systems operate on a different system. The trigger signal from the distributor is a sine wave and one cannot use it to run the tachometer. Instead, in the CDI box itself, generates the tach signal. This circuit is more sensitive to load from the tachometer which can result in CDI failure. 6 Pin CDI systems would include erratic tachometer operation, no spark due to CDI failure, and repeated CDI box failures.

8 pin CDI boxes were the predecessors of the 6 pin CDI box. The tach signal generates internally, like the 6 pin boxes. In this box the tach signal used in some can look like an early 911T signal. One will have to take care when assessing a failure in these cars.

All cars should be checked at routine intervals. Cars suffering multiple ignition failures with no apparent cause should be investigated further. This check takes less than 10 minutes to perform and can prevent future issues.

Most of the major gauge repairers today are using a universal type replacement tachometer circuit board. This means that no matter the signal received they should run and not place any load on the trigger circuit. The replacement part is internal, and no external differences can be seen.